A quadratic function is a function that can be written in the form:

We can write quadratic functions in three different forms:

Each of these three forms gives us different useful information about the graph of a quadratic function, such as its vertex, x-intercepts, etc.

The graph of a quadratic function is a parabola, a U-shaped curve that opens upward or downward. All parabolas are symmetric with respective to its axis of symmetry. 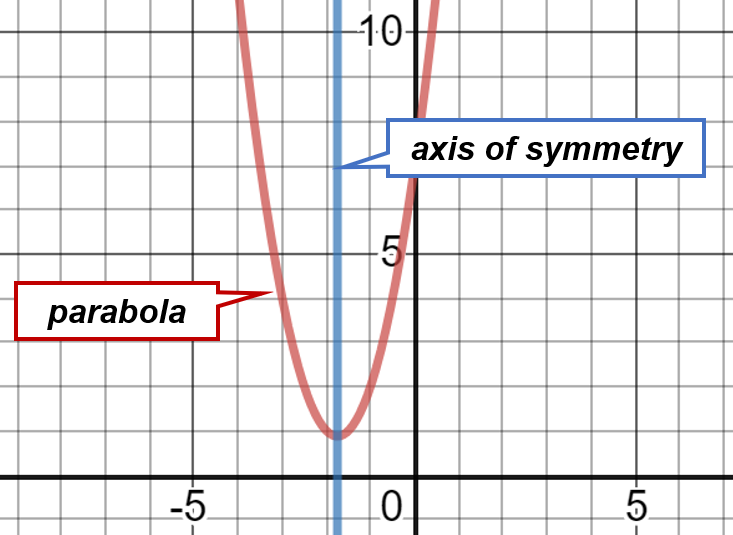 There are several ways to graph a quadratic function given in standard form, and we will explore two of the ways.

1. By converting it to vertex form, which allows us to quickly graph the general shape of the parabola.

2. By finding the vertex and intercepts using factoring or the Quadratic Formula, which allows us to find some key points of the graph, to be able to draw it with more accuracy.

Recall that the vertex form of a quadratic function is:

When a quadratic function is given in vertex form, we can immediately identify the vertex of its parabola, whether it opens up or down, as well as the width of its opening:

This is all the information we need to quickly sketch the general shape of a parabola.

Example: Find the vertex form of \(f(x)=2x^2-8x+5\) by completing the square, then sketch the parabola representing this function.

3. Create a perfect square trinomial with the \(x^2\) and \(x\) terms. Do this by taking half of the value of the coefficient in the \(x\) term, squaring it, then adding it to both sides. Note: Since we want to add this new value inside the brackets (to create the trinomial), we must multiply it by the leading coefficient when adding it to the other side:

From this vertex form, we can immediately see the information needed to sketch the general shape of the parabola. 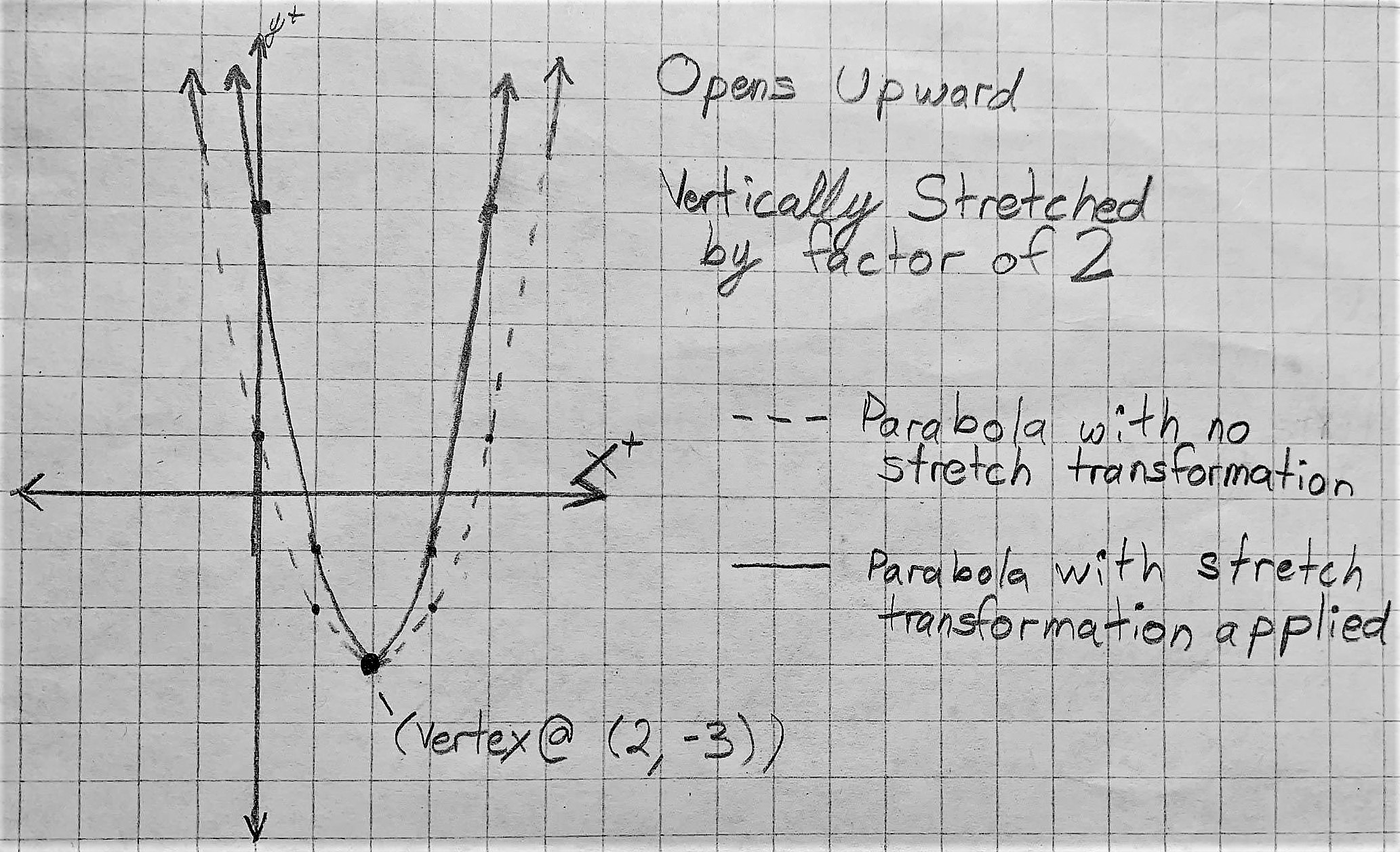 Notice that the two parabolas both have the same vertex.

We can use a quadratic function to find the points at which the parabola intersects the \(x\)-axis. To do this, we need to find when the function is equal to zero, by a process called finding the zeros. To do this, we have two options: factor or use the quadratic formula.

The quickest way to find the zeros of a quadratic function is to factor the equation, and then set y as 0.

can be factored into factored form:

To solve for \(x\), we need to recognize that any term multiplied by 0 will equal 0. So, since we have 2 terms multiplying each other, if either one of them is equal to 0, then the whole equation is equal to 0. So we have:

These two are the \(x\)-intercepts of our parabola.

Note: This technique will only work when the parabola has \(x\)-intercepts (as it is possible for a parabola to not intersect the \(x\)-axis at all).

Then we can substitute in the coefficients from the equation, and the formula will output the \(x\)-values we're looking for.

then use the Quadratic Formula:

The other piece of information that we will need to graph the parabola after finding the direction of opening and the \(x\)-intercepts is the vertex. The vertex is the highest or lowest point (maximum or minimum) of the parabola (depending on if it opens up or down). It is the point at which the parabola turns (turning point).

The Axis of Symmetry Formula is:

Notice that this formula is actually the first half of the Quadratic Formula. If you can remember the quadratic formula, you can use it to recall the Axis of Symmetry formula.

Example: Determine the vertex of the parabola representing the quadratic function \(y=x^2-8x+12\), then sketch it.

We use the Axis of Symmetry formula to find the x-coordinate of the vertex:

Substituting this value into the quadratic function gives us the y-coordinate:

Recall that in a previous example, we found that the \(x\)-intercepts of this function are \(x=6\) and \(x=2\). Also, since the leading coefficient \(a=1>0\), the parabola opens upwards. We use this information in addition to the vertex point to sketch the graph: 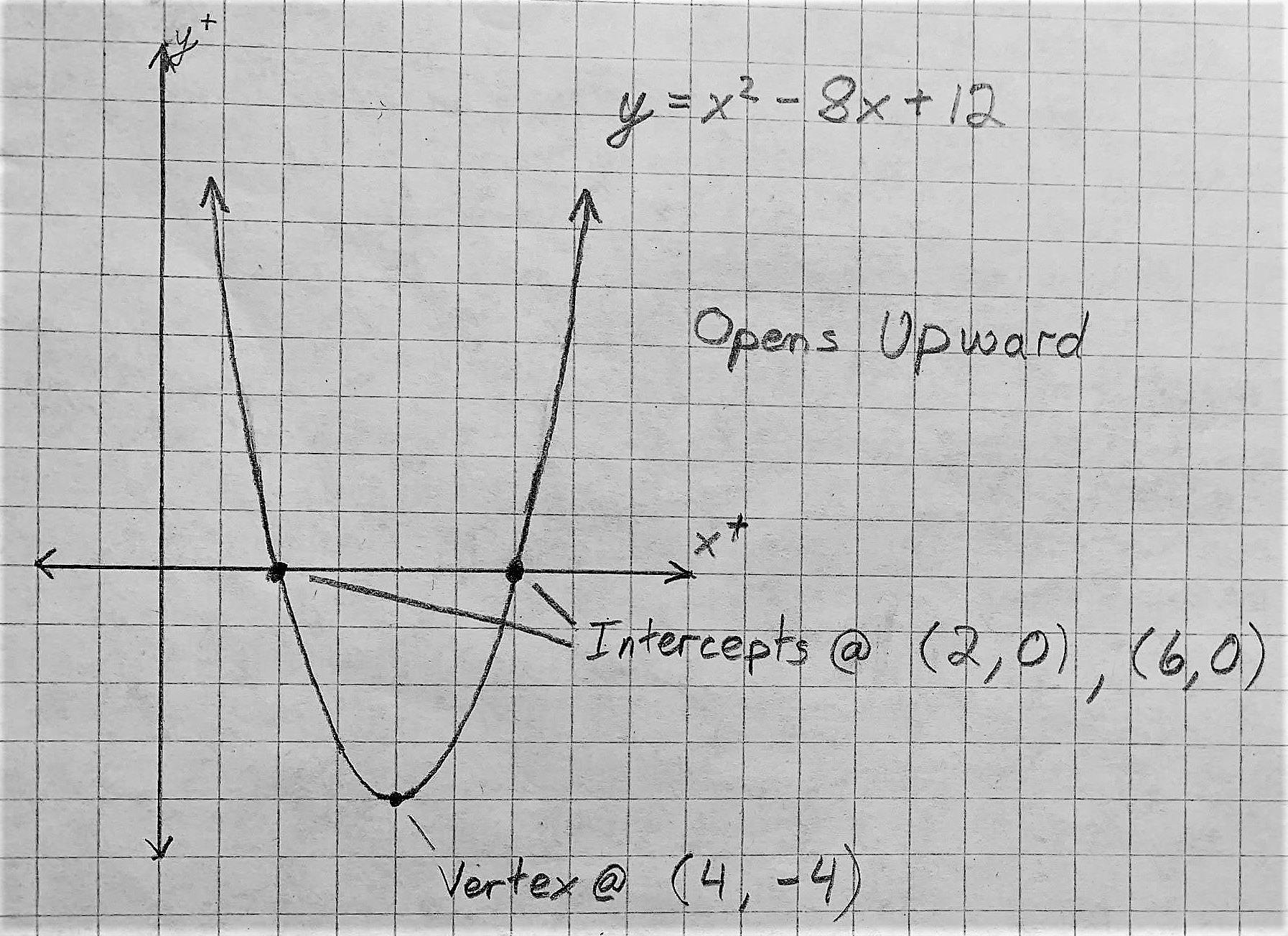 When do the two parabolas share the same vertex? When \(r = s\).