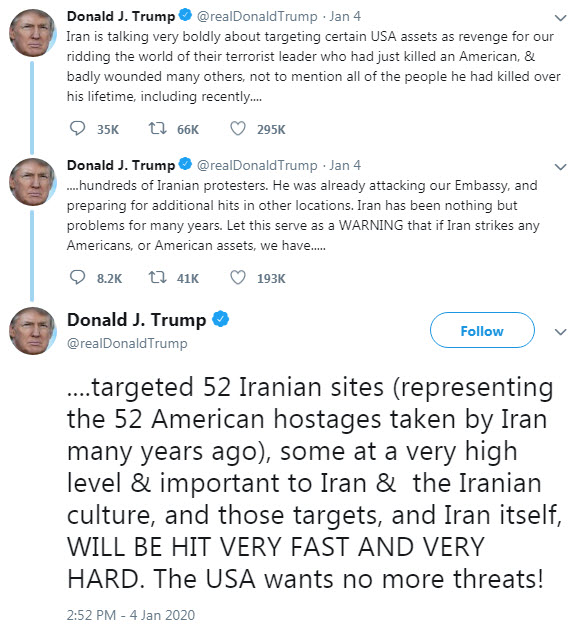 While it is tempting to dismiss inflammatory tweets and other errata, even from government officials, my instinct is to treat them with seriousness.  That said, this type of speech should always be contextualized.

By way of contextualizing this presidential tweet, I caught part of an audio segment interviewing Nahal Toosi, a foreign affairs reporter for Politico.

In her analysis, she characterizes the tweet as a self-inflicted wound, and an advantage to Iran, allowing the Iranian leadership to diplomatically isolate the United States.  Her words are, "And it's just one of those things also that, frankly, it's sort of a self-inflicted wound because the Trump administration. President Trump himself has said that the U.S. is not angry with the Iranian people. But so it's raised the idea that you're going after their culture and their heritage. It's very much goes against that claim that the only people that you're upset with are the regime in Tehran" (Galloway, 2020, para. 9)

To test the validity of a point of analysis it is helpful to find agreement from more than one trusted source of information.  This observation is especially true for individuals who are in the initial stage of following their curiosity and educating themselves about an event.

In support of the isolationist theory of this and other presidential tweets, Aaron Blake, writing in the Washington Post, said, "Trump’s foreign policy has always been a high-risk, high-reward proposition. The upside is that he throws his weight around and gets people to bend to his will, whether that be allies or adversaries. The play with Iran has always been that maximum pressure would bring that country to heel. Perhaps it still will.  But the downside is that people call his bluff — or that Trump finally goes too far. And if the situation with Iran does blow up into full-scale war, it isn’t just with Iran that it might have backfired; it could well be with the United States’ top allies, as well" (Blake, 2020, para. 3)