Parts of a Reference

Wondering how to tell the parts of a reference? Download this handout:

The advice in this guide is based on the MLA Guide, 8th Edition: 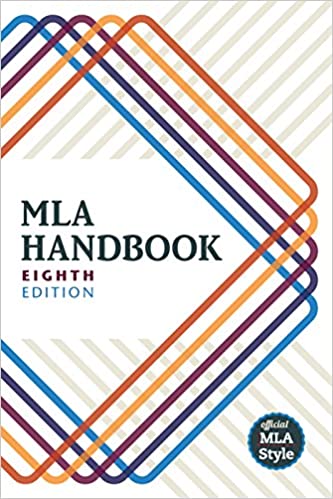 In June 2021 the MLA published the MLA Handbook, 9th edition.

Libraries is now supporting the 9th edition of the manual. This guide will no longer be updated.

Remember that the specific format for references varies depending on the type of source. The general format for sources in the Works Cited list and in-text citations are as follows:

1 Author
For sources with only one author, begin the Works Cited entry with the author's last name, followed by a comma and the rest of the name as presented in the work.

Jones, Thomas B. and Nenad G. Nenadic. Electromechanics and MEMS. Cambridge UP, 2013.

In-text citations include both author last names and the page number:

3 or more Authors
For sources with 3 or more authors, include the first author followed by a comma and et al.

In-text citations include only the first author's last name followed by et al. and the page number:

When a corporate entity is the author of a source, use the corporate name:

When a source is published by an organization that is also it's author, begin the entry with the title, skipping the author element, and list the organization only as publisher:

When a source is part of a larger whole, for example a chapter in a book or an article in a journal, the larger whole is the container.

In the Works Cited list, the part (article, section, chapter or web page) is listed in quotation marks. The container or whole (journal, book, entire website) is listed in italics.

How you specify a source's location depends on the format of the source.

A range of page numbers preceded by pp. specifies the location of a chapter, section or article in a book or journal.

A web address or URL indicates the location of an online source.

When possible, include a DOI number instead of a URL for online sources.

For eBooks and articles from library databases, include the database or platform name in italics.

Citations are part of your sentence structure, and closing punctuation follows the citation.

When a quote appears in the middle of a sentence, follow the quote with the in-text citation, then complete your sentence immediately following the citation.

Citations at the end of a sentence

When a quote appears at the end of your sentence, close the quote with double quotation marks and follow immediately with the in-text citation. Follow the citation with the closing punctuation for the sentence.

In the new 8th edition of the MLA Handbook, including an access date for online sources is optional.

If you choose to include an access date, it appears after the location information (URL or DOI).

Write the date as it is presented on your source in the format Day Month Year, Time. Use as much information as is available and relevant to the retrieval of the source.

For example, year of publication is sufficient for books, while Day Month and Year is required for daily newspapers.

Months longer than 4 letters should be abbreviated.