What is hypothesis testing?

The null hypothesis, (\(H_0\)), represents the status quo. Meaning the evidence collected is not strong enough to warrant a change.

The alternative hypothesis, (\(H_1\) or \(H_A\)), represents what is required to make a change to the status quo. That means there is statistical evidence using probability that it is different from the status quo.

For example, you believe your internet is slower than the average. You decide to collect the data on your connection speed every day for a month. The null hypothesis would be that there is no significant difference between your connection speed and the average. And the alternative hypothesis would be that your internet is slower.

So what is considered convincing evidence? To consider what evidence is convincing we use a test statistic to decide whether to reject the null hypothesis or not. The distribution is divided up into two regions, one to reject the null hypothesis and one that remains the same. These regions are determined by the significance level or critical value. 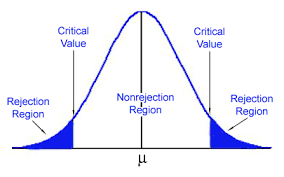 The test statistic depends on the distribution. For normal or approximately normal distributions, we can use the z- or t-statistics. 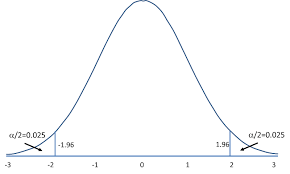 Two-tailed test: The diagrams above represents a two-tailed hypothesis test. This means that there is a rejection region at the two extreme ends of the distribution. The null and alternative hypothesis is stated as the following when comparing it to the population mean:

There are two different one-tailed tests. One where the rejection region is in the upper extreme of the distribution and the other the lower extreme: 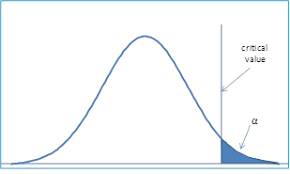 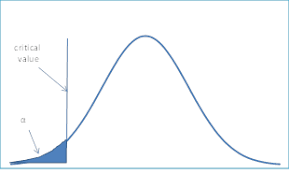 Setting up the null and alternative hypothesis

Example 1: A formal hypothesis test is to be conducted using the claim that the mean height of men is equal to 174.1 cm. What is the null and alternative hypothesis?

Solution: Since the test is to see if the population mean is equal to 174.1 cm. Any mean that is significantly higher or lower will reject the claim. This is a two-tailed test because there are rejection regions both in the upper and lower extremes.

The null hypothesis or status quo is that the mean height of men is equal to 174.1 cm.

Solution: In this example, the status quo is that fewer than 95% of adults have a cell phone. The sample of 1128 adults shows a mean that may is lower. You want to test if this sample mean is significantly lower to warrant a change to the population mean of 95%.

You are performing a lower one-tailed test because you want to show this sample is significantly lower. A value significantly higher does not challenge this claim for this test. Therefore, the null and alternative hypothesis are (note that the population mean, 95%, is used and not the sample mean):

Solution: You are testing that your sample is showing a significant increase to the original claim. This is an upper one-tailed test since the rejection region of the claim will be values that are statistically higher.

Significance level and Type I and II errors

The significance level \(\alpha\) for a hypothesis test is the probability used as the cutoff for what constitutes significant evidence against the null hypothesis.

For example, a significance level of \(\alpha=0.05\) in an upper one-tailed test in a normal distribution represents the following rejection region 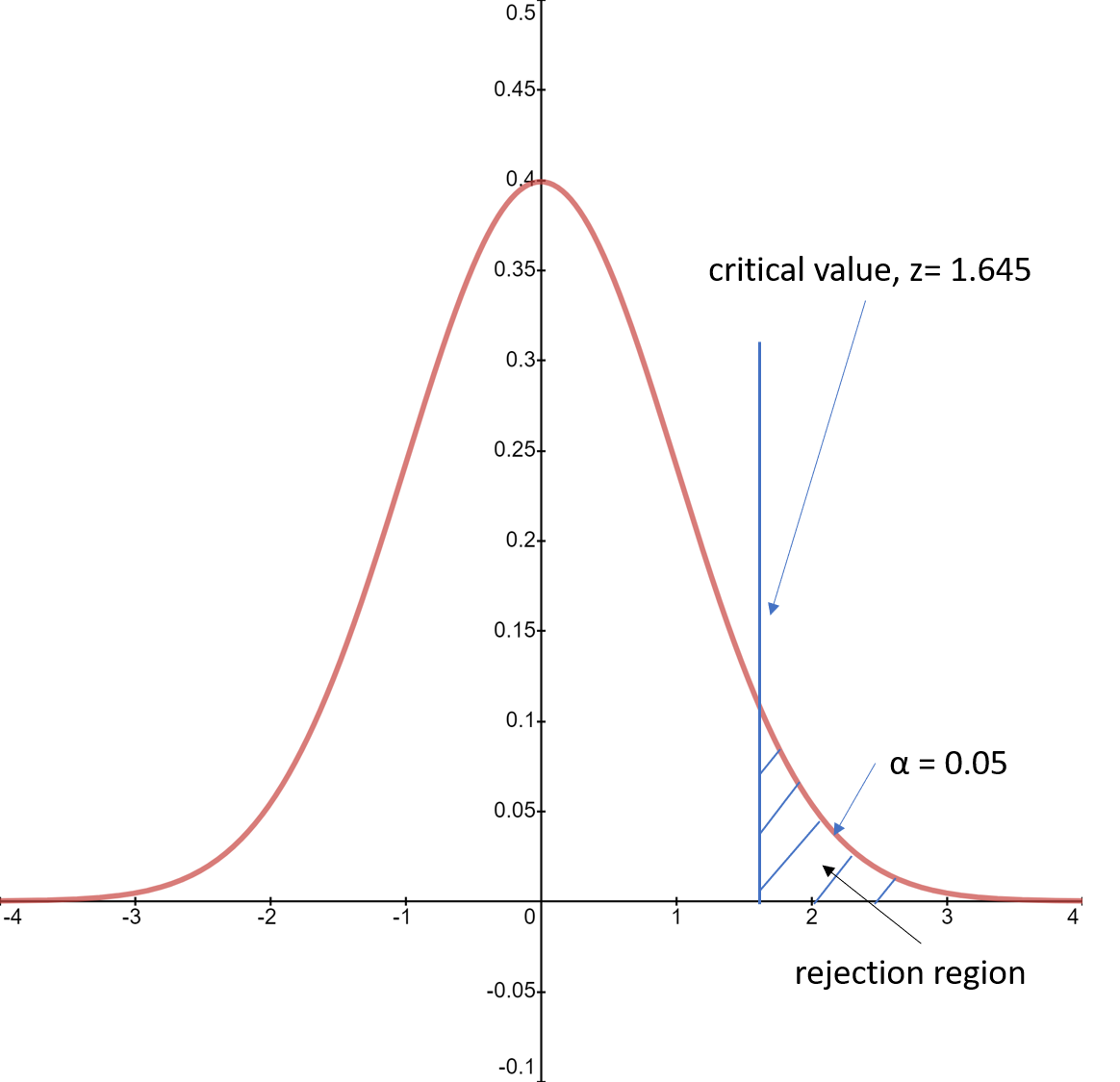 The critical value of \(z=1.645\) was found using the z-table looking up the top 5% of the normal distribution.

However, a significance level of \(\alpha=0.05\) during a two-tailed test means that the upper and lower rejections regions total 5%. That means on each side there is a rejection region of 2.5% or 0.025. 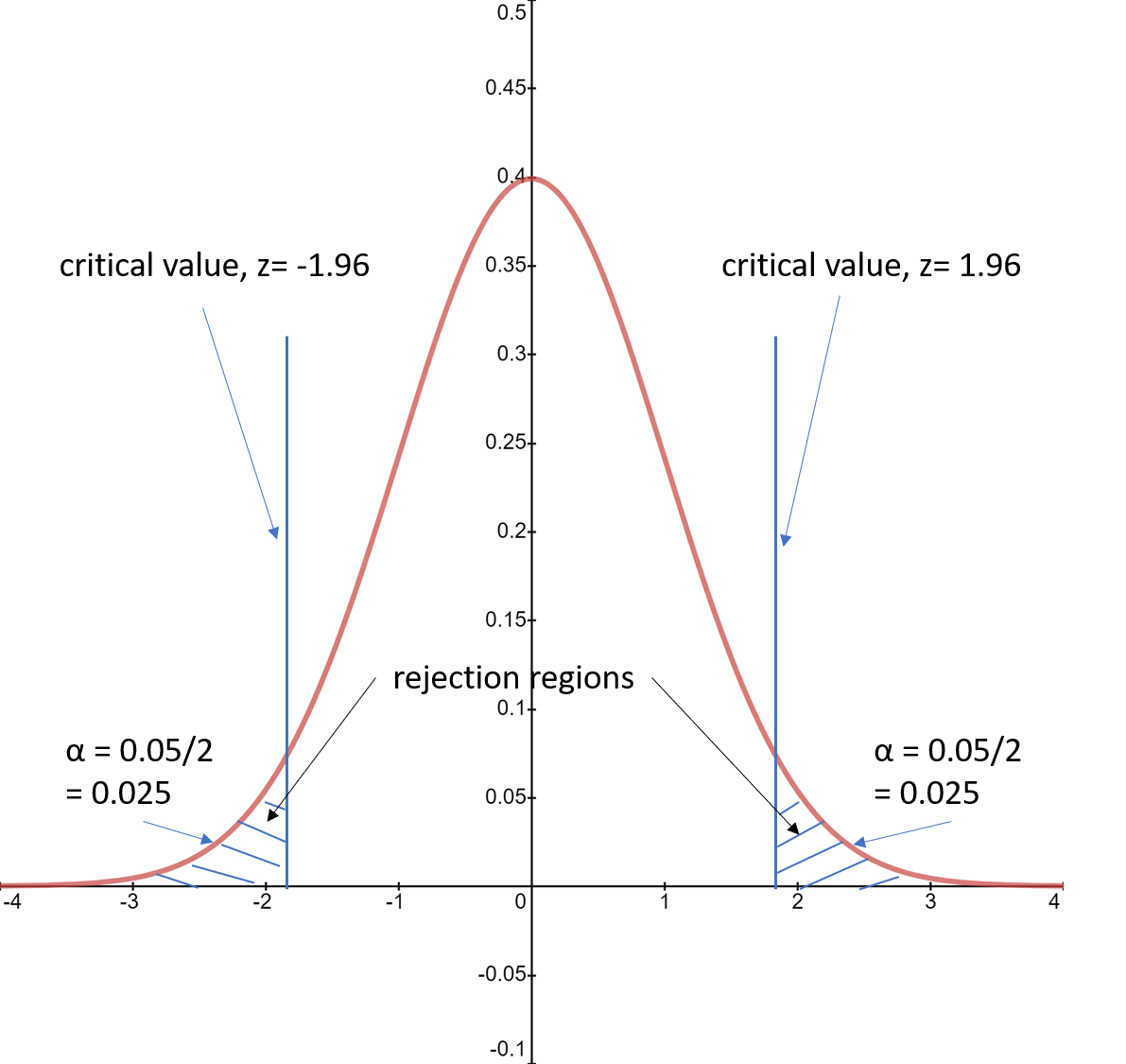 Note that determining if it is a one-tailed or two-tailed test when setting up the alternative hypothesis is important to setting up the rejection region and finding the critical value.

Type II error: The mistake of failing to reject the null hypothesis when it is actually false. Type II error is represented by the symbol \(\beta\) and can be calculated using the Power of a Test.

As a result, there are four outcomes possible. Two of those outcomes are correct, and two are errors.

\(\alpha\) and \(\beta\) are inversely related (as one increases, the other decreases). Therefore, it is impossible to reduce both errors to 0. In an actual study, you will be choosing your own significance level, so keep type I and I errors in mind.

Example 1: There is a medicine that claims to cure a disease. Describe the type I and II errors.

Example 2: You decide to attend an online lecture because it will discuss a topic you are not familiar with.

Each possibility contains a probability value depending on the information provided.

Statistics by Matthew Cheung. This work is licensed under a Creative Commons Attribution-NonCommercial 4.0 International License.