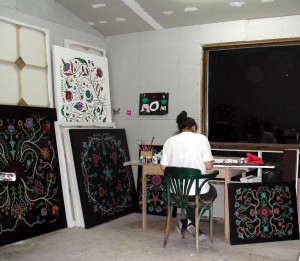 Photo and bio via christibelcourt.com:

"Christi Belcourt is a Michif (Métis) visual artist with a deep respect for Mother Earth, the traditions and the knowledge of her people.  In addition to her paintings she is also known as a community based artist, environmentalist and advocate for the lands, waters and Indigenous peoples. She is currently a lead organizer for the Onaman Collective which focuses on resurgence of language and land based practices. She is also the lead coordinator for Walking With Our Sisters, a community-driven project that honours murdered or missing Indigenous women. Her work Giniigaaniimenaaning (Looking Ahead) commemorates residential school survivors, their families and communities to mark the Prime Minister’s historic Apology in 2008 and is installed at Centre Block on Parliament Hill commissioned by the Government of Canada.  She was named the Aboriginal Arts Laureate by the Ontario Arts Council in 2015. In 2016 she won a Governor General’s Innovation Award and was named the winner of the 2016 Premier’s Awards in the Arts.  Author of Medicines To Help Us (Gabriel Dumont Institute, 2007) and Beadwork (Ningwakwe Learning Press, 2010). Christi’s work is found within the permanent collections of the National Gallery of Canada, the Art Gallery of Ontario, Gabriel Dumont Institute, the Indian and Inuit Art Collection, Parliament Hill, the Thunder Bay Art Gallery and Canadian Museum of Civilization, First People’s Hall." 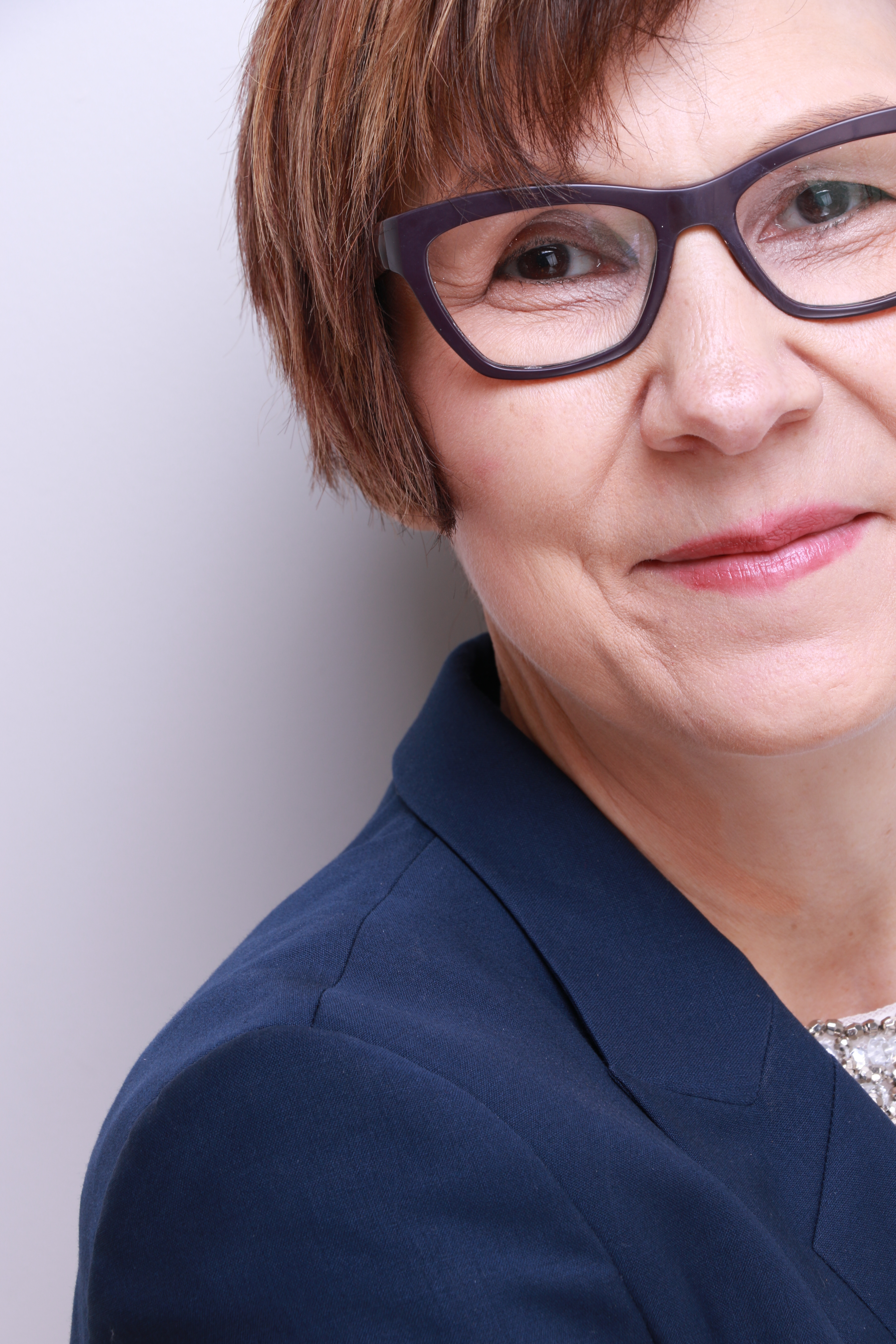 "A member of the Gitksan First Nation, Cindy has 25 years of social work experience in child protection and Indigenous children’s rights. Her promotion of culturally based and evidence informed solutions has been recognized by the Nobel Women’s Initiative, the Aboriginal Achievement Foundation, Frontline Defenders and many others. An author of over 50 publications and a widely sought after public speaker, Cindy has collaborated with other Indigenous leaders to assist the United Nations Committee on the Rights of the Child in the development and adoption of a General Comment on the Rights of Indigenous children."

Photo and bio via drewhaydentaylor.com

"During the last thirty years of his career, Drew Hayden Taylor has done many things, most of which he is proud of. An Ojibway from the Curve Lake First Nations in Ontario, he has worn many hats in his literary career, from performing stand-up comedy at the Kennedy Center in Washington D.C., to being Artistic Director of Canada’s premiere Native theatre company, Native Earth Performing Arts. He has been an award-winning playwright, a journalist/columnist (appearing regularly in several Canadian newspapers and magazines), short-story writer, novelist, television scriptwriter, and has worked on numerous documentaries exploring the Native experience. Most notably as a filmmaker, he wrote and directed REDSKINS, TRICKSTERS AND PUPPY STEW, a documentary on Native humour for the National Film Board of Canada, and for CBC, co-created SEARCHING FOR WINNITOU, an exploration of Germany’s fascination with North American Indigenous culture.''

Photo and bio via Writers' Trust of Canada:

"Eden Robinson is a novelist and short fiction writer from the Haisla and Heiltsuk First Nations. Her debut collection of stories, Traplines, won Britain’s Winifred Holtby Prize in 1997. Her first novel, Monkey Beach, which combines contemporary realism with Haisla mysticism, was shortlisted for the Giller Prize and a Governor General’s Literary Award, and received the Ethel Wilson Fiction Prize. Her 2017 novel, Son of a Trickster, the first volume in a projected trilogy, was shortlisted for the Scotiabank Giller Prize. Robinson gave the 2010 Henry Kreisel Memorial Lecture, which was published as the memoir The Sasquatch at Home: Traditional Protocols & Modern Storytelling. She is a recipient of the Writers’ Trust Engel/Findley Award and the University of Victoria’s Distinguished Alumni Award. She has been a Writer-in-Residence at the Whitehorse Public Library, and works with the Writers in Electronic Residence program, which links schools across the country with professional writers. Robinson lives in Kitamaat Village, BC." 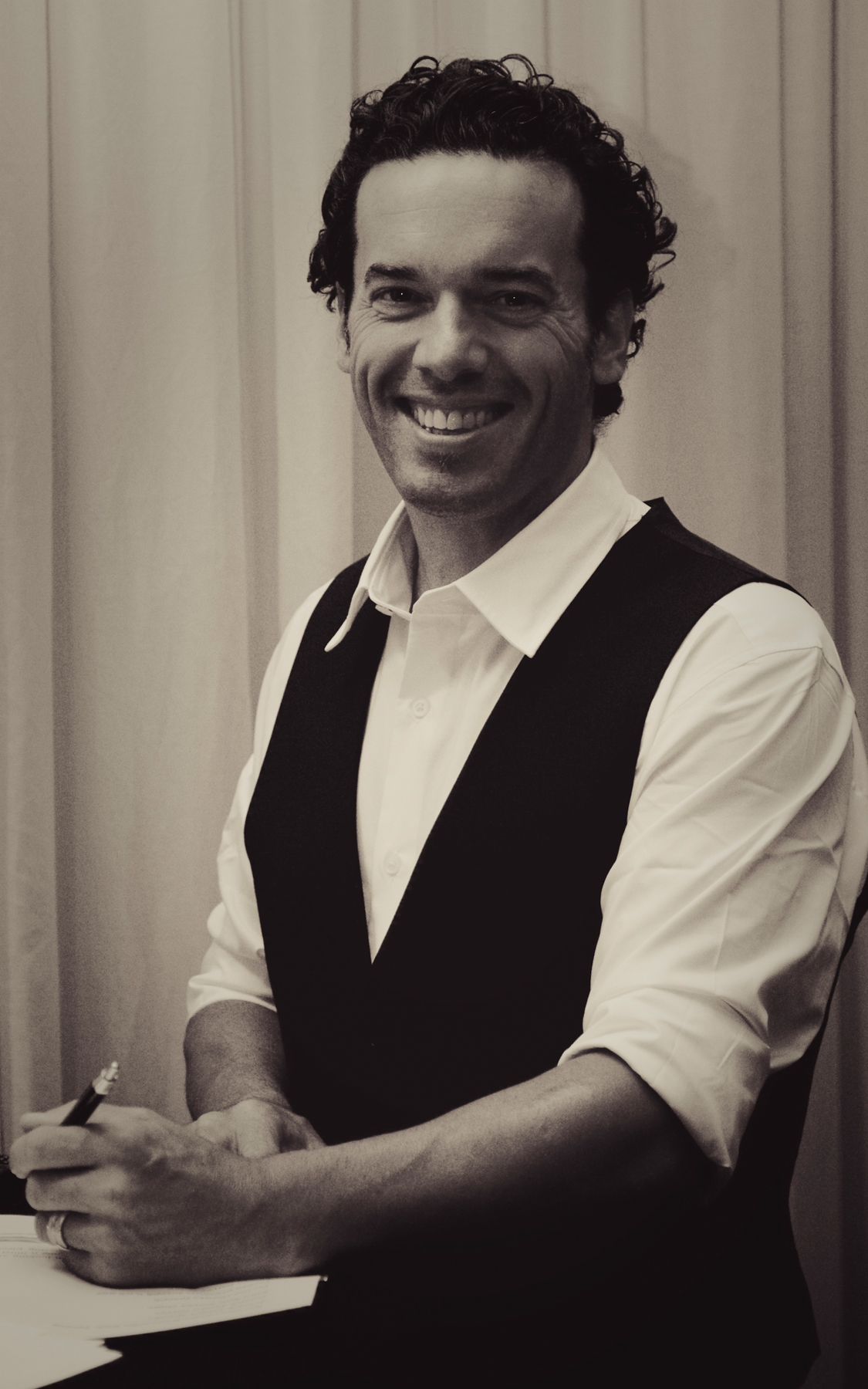 Photo via Historica Canada
Bio from The Canadian Encyclopedia (2009, October 18)

"Joseph Boyden, CM, author (born 31 October 1966 in Toronto, ON). Joseph Boyden's work focuses on the historical and contemporary experience of First Nations peoples of Northern Ontario. He became widely known in Canada following the publication of his debut novel, Three Day Road (2005), which won numerous awards and was nominated for a Governor General’s Award. His second novel, Through Black Spruce, won the 2008 Scotiabank Giller Prize. He was made a Member of the Order of Canada in 2015. Born in Toronto to Blanche and Raymond Wilfrid Boyden, a highly decorated medical officer who served in the Second World War, Boyden has claimed Indigenous heritage through both his father’s and mother’s ancestry. However, he has been accused of misrepresenting himself by those who say his claims cannot be documented or confirmed." Celebrated Vancouver-born author, poet, artist, and activist Lee Maracle, a member of the Stö:lo Nation, made her mark in the early 1970s as one of the first aboriginal writers to have fiction published in Canada. Reinventing traditional stories she has known since childhood, Maracle seamlessly blends mythology with contemporary concerns. Photo and bio via leannesimpson.ca:

"Leanne Betasamosake Simpson is a renowned Michi Saagiig Nishnaabeg scholar, writer and artist, who has been widely recognized as one of the most compelling Indigenous voices of her generation. Her work breaks open the intersections between politics,  story and song—bringing audiences into a rich and layered world of sound, light, and sovereign creativity.

Working for over a decade an independent scholar using Nishnaabeg intellectual practices, Leanne  has lectured and taught extensively at universities across Canada and has twenty years experience with Indigenous land based education. She holds a PhD from the University of Manitoba, and teaches at the Dechinta Centre for Research & Learning in Denendeh. Leanne's books are regularly used in courses across Canada and the United States  including Dancing on Our Turtle’s Back, The Gift Is in the Making,  Lighting the Eighth Fire (editor), This Is An Honour Song (editor with Kiera Ladner) and The Winter We Danced (Kino-nda-niimi editorial collective).  Her latest book, As We Have Always Done:  Indigenous Freedom Through Radical Resistance  was published by the University of Minnesota Press in the fall of 2017, and was awarded Best Subsequent Book by the Native American and Indigenous Studies Association.

As a writer, Leanne was named the inaugural RBC Charles Taylor Emerging writer by Thomas King in 2014 and in 2017/18 she was a finalist in the Rogers Writers' Trust Fiction Prize and the Trillium Book Award. She has published extensive fiction and poetry in both book and magazine form. Her second book of short stories and poetry, This Accident of Being Lost is a follow up to the acclaimed Islands of Decolonial Love and was published by the House of Anansi Press in Spring 2017.

Leanne is also a musician combining poetry, storytelling, song writing and performance in collaboration with musicians to create unique spoken songs and soundscapes. Leanne's second record f(l)light produced by Jonas Bonnetta (Evening Hymns), was released in the fall of 2016.  She was awarded the inaugural Outstanding Indigenous Artist at the Peterborough Arts Awards in 2018.

Leanne is Michi Saagiig Nishnaabeg and a member of Alderville First Nation." Bio via pampalmater.com
Photo via Women of Influence

"Dr. Pamela D. Palmater is a Mi’kmaw citizen and member of the Eel River Bar First Nation in northern New Brunswick. She has been a practicing lawyer for 20 years and is currently an Associate Professor and the Chair in Indigenous Governance at Ryerson University. She comes from a large family of 8 sisters and three brothers. Pam has two sons, Mitchell and Jeremy, who are also active in the community.

She has 4 university degrees, including a BA from St. Thomas in Native Studies, and an LLB from UNB where she won the Faskin Campbell Godfrey prize in natural resources and environmental law. She went on to complete her Masters and Doctorate in Law from Dalhousie University Law School specializing in First Nation law.

Pam has been studying, volunteering and working in First Nation issues for over 25 years on a wide range of social, political and legal issues, like poverty, housing, child and family services, treaty rights, education and legislation impacting First Nations. She came in second in the Assembly of First Nations election for National Chief in 2012 and was one of the spokespeople, organizers and public educators for the Idle No More movement in 2012-13.

"Richard Wagamese, Anishinaabe (Ojibwe) novelist, journalist, mentor (born 4 October 1955 in northwestern ON; died 10 March 2017 in Kamloops, BC). A well-known Indigenous writer in Canada, Wagamese won several awards including the Canada Council for the Arts Molson Prize (2013) and the Writers’ Trust of Canada’s Matt Cohen Award (2015). His works speak about the historical and contemporary socio-economic issues affecting Indigenous communities in Canada. They also bring attention to issues regarding Indigenous identity, culture and truth and reconciliation. A beloved writer, Wagamese’s works have inspired many Indigenous and non-Indigenous peoples and writers alike."

Bio from the Toronto Star
Photo via ttalaga.ca

"Tanya Talaga is the author of Seven Fallen Feathers, which was the winner of the RBC Taylor Prize, the Shaughnessy Cohen Prize for Political Writing, and the First Nation Communities Read Award: Young Adult/Adult; a finalist for the Hilary Weston Writers’ Trust Nonfiction Prize and the BC National Award for Nonfiction; CBC’s Nonfiction Book of the Year, a Globe and Mail Top 100 Book, and a national bestseller. Talaga was the 2017–2018 Atkinson Fellow in Public Policy, the 2018 CBC Massey Lecturer, and author of the national bestseller All Our Relations: Finding The Path Forward. For more than twenty years she has been a journalist at the Toronto Star. She has been nominated five times for the Michener Award in public service journalism and has been part of two teams that have won National Newspaper Awards for Project of the Year. Talaga is of Polish and Indigenous descent. Her great-grandmother, Liz Gauthier, was a residential school survivor. Her great-grandfather, Russell Bowen, was an Ojibwe trapper and labourer. Her grandmother is a member of Fort William First Nation. Her mother was raised in Raith and Graham, Ontario. She lives in Toronto." 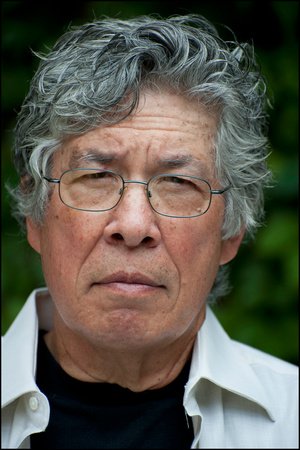 "Thomas King, CM, novelist, short-story writer, essayist, screenwriter, photographer (born 24 April 1943 in Roseville, California). A Member of the Order of Canada and two-time nominee for the Governor General’s Award, King is often described as one of the finest contemporary Aboriginal writers in North America."

"Waubgeshig Rice is an author and journalist originally from Wasauksing First Nation. His first short story collection, Midnight Sweatlodge, was inspired by his experiences growing up in an Anishinaabe community, and won an Independent Publishers Book Award in 2012. His debut novel, Legacy, followed in 2014. A French translation was published in 2017. His latest novel, Moon of the Crusted Snow, was released in October 2018.

Waub got his first taste of journalism in 1996 as an exchange student in Germany, writing articles about being an Anishinaabe teen in a foreign country for newspapers back in Canada. He graduated from Ryerson University’s journalism program in 2002. He’s worked in a variety of news media since, reporting for CBC News for the bulk of his career. In 2014, he received the Anishinabek Nation’s Debwewin Citation for excellence in First Nation Storytelling. He currently hosts Up North, CBC Radio’s afternoon show for northern Ontario."